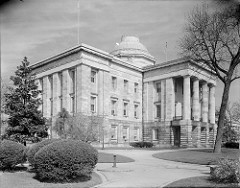 Legislative history is looking for legislative intent, by looking at debates, hearings, committee minutes, or reports, trying to clarify what the law says by looking at what the lawmakers said as they created the law. It’s trying to find a better answer to the question “What does the law mean?”  or “How did it get that way?”

Statutory history is looking at how a law evolved and may involve looking for old statutes.  A researcher may know what the law says now, but needs to know how the law was written 10 or 20 or 50 years ago.

Example: Let’s say there’s a statute that says, “Any person who injures another person with a motor vehicle is punished as a Class B felon.”  THIS EXAMPLE IS NOT A REAL STATUTE

A  Legislative History question for this might be:  “I hit someone but I was riding a Segway.  Is that a motor vehicle?"

That’s legislative history--looking at the context of the law to see if you can find some further definition of the law.

Statutory History would be more along the lines of: “I hit someone with a car, but it was more than 10 years ago.  What did the law say in 2001?”

You have to be prosecuted under the law as it was at the time of the offense, so in this case you need a statutory history.  And maybe in this case you find that the law passed originally in 1990, and was then revised in 2005.   But from 1990 to 2005, maybe you’ll find that the statute read “Any person who injures another person with motor vehicle, shall be punished as a Class F felon.”  The only difference is in the type of Felony class--but that makes a difference in the punishment if convicted--so what the law said at the time makes a difference.

Generally, statutory history sources are available, though locations are limited.

Generally, legislative history sources are difficult, though not impossible, to find.

Some sources like legislative journals and Session laws are available starting in the 1700s or even earlier.  But there are some important exceptions.  Unfortunately, there are no official transcripts of debates from the General Assembly.  The Senate started recording their sessions in the 1970s; the House didn’t start till 2009--so there’s nothing official for the 19th century, and almost nothing for the 20th.  Another source is committee minutes--the General Assembly does a lot of their work in committee--they hold hearings, craft a lot of the legislation--and so minutes could be very useful.  But there are some problems with them--1) they’re only available in the Legislative Library, 2) they only started keeping them in 1967, and 3) many times they’re summary minutes.  It’s always worth looking at them, because there are always exceptions, but most of the time the only information in the minutes is who was there and when they met.