Where to Start Looking for Statutory History

Note that this method is useful specifically for the North Carolina General Statutes. Researching other laws may have a similar but not identical methodology.

The history of the NC statutes is pretty complicated, but they are available in print and increasingly online.  The one exception, at least at this time, is the statutes since 1943—those will probably only be available in print for quite a while. Academic law libraries or special libraries like the N.C. Government & Heritage Library or the N.C. Supreme Court Library will have the superceeded statutes.

Current statutes are available both in print and online.  The online version is perfectly valid, but if you’re doing legislative history, try to get hold of a print copy. The reason for this is because of the annotations.  Annotations are notes added by the editors to the statutes--usually they’re about cases that have interpreted the statute, but sometime the editors have added notes that add to the general understanding of the statute. Most of the time you’re only going to find case annotations about very narrow aspects of the statute, but sometimes you get lucky, and someone has already done the work for you.

This is where legislative and statutory history diverges.

There are two ways you can do a statutory history.  For example, if you are looking for what chapter 14-11 said in 1987.

You can look at the history note and tell right away that it’s never changed.  The law now is exactly the same as it’s been since it passed in 1941.  You’re done.

But you need to know about section 14-12.  That’s a little more complicated.  One way of trying to do it is to look at all the session laws mentioned in the history note, but it can get tedious.  So the other way is to look at superseded statutes. The first useful compilation of North Carolina laws came out in 1821, and they were recompiled about every 15 to 20 years, until 1943, when the statutes were compiled one more time into the form we recognize today.  So if you’re looking for statutory history before 1820, you just have to look at the session laws.  Between 1821-1942, you look at the 20 year compilations and then at the session laws in between to see what changes might’ve happened.

After 1943, the publishers put out bound volumes that they updated every year or 2 years with softbound supplements.  The supplements only printed the sections of statutes that had changed or been added in the intervening years  If a statute didn’t change, it wasn’t in the supplement.  Every few years, the supplements would get so big that they’d just republish the complete volume, and then the cycle would start over again.

Let’s look at an example, the 14-12.1 history note. If you look at the note, you can use it to figure out what years you’ll need to look at.

To find a Legislative History, follow the legislative process in reverse.  Start with a statute, and then work your way through the session laws and so on.

Structure of NC Statutes and How to Read a Citation

The picture is from the Summary of Contents from the online version of the statutes at the General Assembly’s website: http://www.ncleg.net. The statutes are arranged by subject.

General Statutes are the laws currently in force, as passed by the General Assembly and arranged into broad subject chapters.  So, for instance, chapter 1 is Civil Procedure, chapter 5A is Contempt, chapter 14 is Criminal Law and so on.

Here’s a portion of the table of contents for Chapter 14 - Criminal Law. 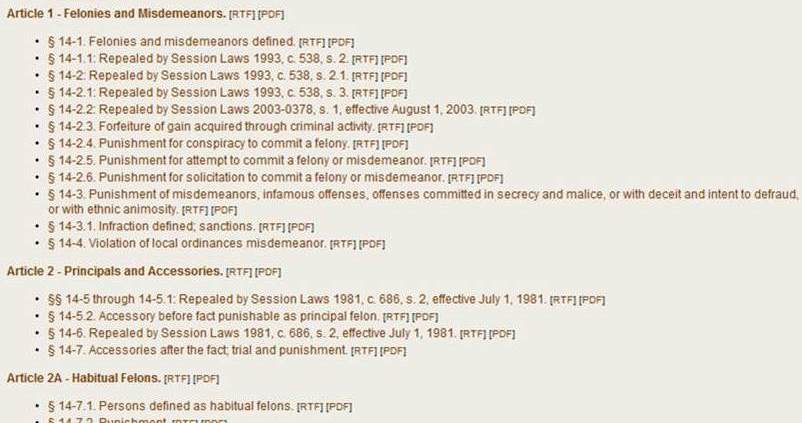 As you can see this chapter is broken down into Articles—broad subtopics under which all the laws on a similar subject have been gathered.  Article 1 is on Felonies and Misdemeanors, article 2 on Principals and Accessories, article 2A on Habitual felons, and so on.  And you’ll notice that the statutes are also broken up into sections.  Most of the time all you’ll need is the chapter and section number to find a statute.

This is chapter 14, article 4, on Subversive Activities.

It’s made up of 3 sections, 14-11, 14-12, and 14-12.1.  You can see how the statutes are set up, and they’re always going to look like this, no matter whether you use the print or the online version. There’s the chapter and section number in bold, along with the title of the section.  Then you see the body of each section of the statutes.  For our purposes it doesn’t’ really matter what it says--we’re not interpreting it.  All we’re interested in is that parenthetical note at the end.  That’s the history note, sometimes called the session law history.  That’s a list of every time the statute has appeared or been altered by the General Assembly, usually by a session law.  Every single section of the statutes has a history note, whether it’s in print or online.