Example of a session law: 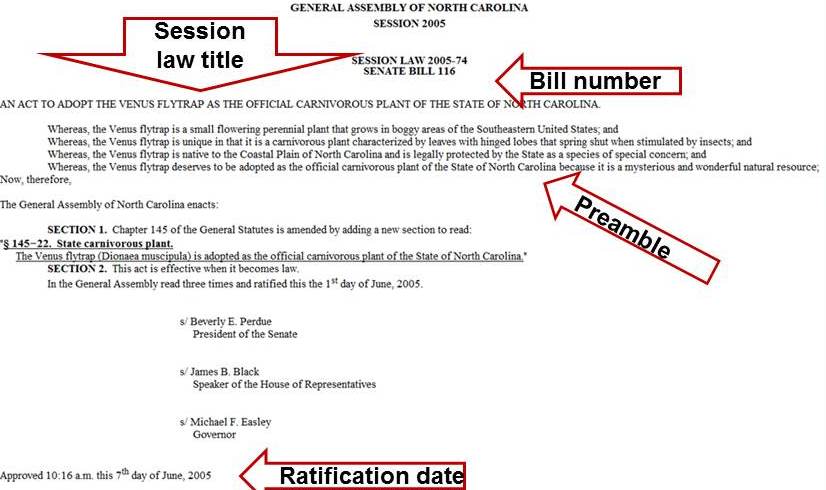 As you can see, there are several indicators and useful references that can aid in the compiling of legislative history.

The first law that passed in the biennial session of the General Assembly is called Chapter 1, the second was chapter 2, and so on.  It doesn’t  matter what the subject is, and doesn’t matter when it was introduced or by whom.  The first law that passes becomes chapter 1. Bear in mind that the Chapter number assigned to a session law has nothing to do with the Chapter numbers in the General Statutes.

Note: On the NC Government Publications Collection website, there is a research guide about Session Laws that might be helpful. It can be found at: http://ncgovdocs.org/guides/sessionlaws.htm

As of 2017, the  NC General Assembly's website (http://ncleg.net) has bill histories attached to session laws beginning with the 1985 session. Bill histories detail when a bill was introduced and what committees it was assigned to, as well as any votes for passage.  Before 1985, users must consult the legislative journals.  The House and Senate Journals are online starting in 1822, and are available at http://ncgovdocs.org.  Note that the Journals for the House and Senate were combined in a single volume until 1868, when each chamber began publishing separately.

The Journals are basically just records of the legislative day—they don’t have debates in them.  As with the bill histories outlined above, they contain topics like when a bill was introduced, who sponsored it, which committee it went to, and sometimes vote counts. (If you’re following a paper trail, you have to look at the chamber in which it was introduced first, follow it all the way through, and then look in the journal for the other chamber; most of the time, the bill number will stay the same when it crosses to the other chamber.  If it was Senate Bill 116, it’ll still be Senate Bill 116 when you look for it in the House Journal.) 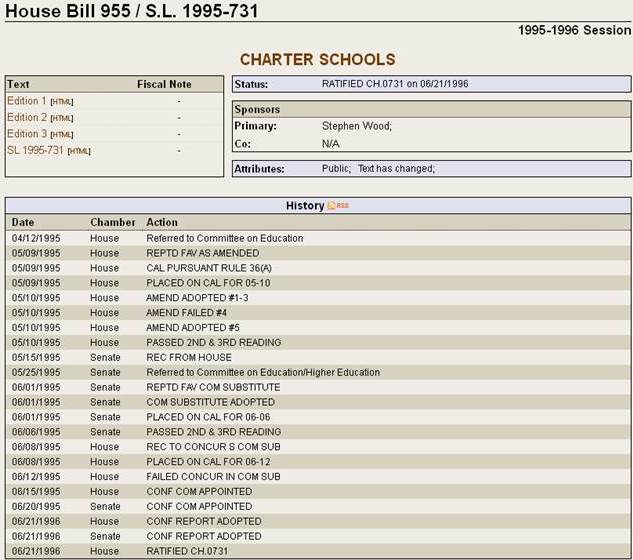 This is the history for House Bill 955, which became session law 1995-731.  It works basically the same way as the paper journal. As you can see, you can glean several important pieces of information from this page.  You can get the sponsor, the committees it was assigned to, and the introduction date.  You can also look at the various editions of the bill as it went through the legislative process.  Sometimes earlier versions of the bill have explanations or preambles that are left out of the final edition.

As you can also see, this bill had a fairly complicated history—amendments failed, a substitute was adopted, it had to go to a conference committee.  The point here is that the chances are pretty good that it generated an extra paper trail as it made its way through the process, or it might have garnered some press attention.

The next step is the floor debates. If it’s in the latter half of the 20th century, you can hope for a recording of a floor debate, or some committee minutes to help you along.

Bear in mind that a lot of floor debate happens after most of the substantial work has been done on the bill in committee.  Also, the debates aren't indexed in any way.

Some committees are much more thorough in what they preserve.  The general rule of thumb is that the closer the committee is to money, the more substantial the notes are likely to be. The finance and appropriations committees, particularly, are good about keeping legislative analyst’s notes and financial statements attached.

Study reports are usually reports requested by the legislature on a particular topic.  They’re not commissioned on every topic, and they’re not about every law.  In any given session, 1500 - 2000 bills may be introduced, and on average only about 80 study reports are commissioned or published.  Still, for the topics they do address,  they can be tremendously useful because they give  background information on the issue, survey other states responses to similar questions, and often provide guidance for the legislators regarding future legislation.

Most study reports are also sent through the State Depository system to libraries such as the  NC Government & Heritage Library or UNC-Chapel Hill.

Related to legislative study commission reports are third party studies.  These are useful when you’re looking for subjects before 1950. Occasionally the governor or the General Assembly would ask an outside commission or think tank to conduct a study and send a report. These are relatively rare, but would be available at the Government & Heritage Library or the NC collection at UNC-Chapel Hill